My Life is a series of awkward plot points.

Beware these are the memoirs of an awkward manchild. I have other blogs on Tumblr and at FlawlessArts.com |Noah A Waters III|¥£€

I have a huge problem with this sentiment. In part because of the social definition or acceptance of what a “nice guy” is. Another part is the connotation that this expression applies to all so called “nice guy”s. Finally- because everything is better in threes– what it means to finish last.

I am a nice guy. I don’t know a lot (beat) but I know this to be true. Of the few constants, in this emotional wreck of a life of mine, being a nice guy is the most prevalent truth. It’s who I am at the core and all the way through to the crest. As much of a self loather as I am the one thing that I can not discount about my self is that I am a nice guy.

There are a lot of guys, in this world we call our own, who feign under the label of a nice guy, who are in fact not. I often hear the complaint that, “I don’t have a girlfriend or I can’t find love, girls don’t like me because I’m a nice guy.” Or some variation of that sentiment. I will agree that a number of truly nice guys suffer from exclusion of affection because of how odd and out of the norm a truly nice guy is in our society. Through some sort of happenings some women are put under the impression that being treated poorly is a sign of affection and caring from a guy. (I realize I am a man and have no postion to speak for all women by any means) you can read more about this dilemma here. But basically nice guys striving to be a gentleman can come off as creepy and out of the ordinary and thus purged of the opportunity to cultivate a relationship.

This is what bothers me the most about all of this. The poser nice guy, the guy who operates under the label of nice guy blaming his lack of affection, intimacy and love because he is a nice guy. (Again that does happen but not as often) if you claim to be a nice guy and suffer a passion void life because of this and let’s say you give a young lady a ride home from a party, buy her a meal, or do any other perceivably nice thing for some one because you want to have sex with them…

You are not a nice guy!

You are a horrible human being, you make me sick and you are one of the reasons some nice guys finish last”. If you then treat said person badly, spread this an altered version of the truth around, or make her feel bad for not returning to you the same feelings… you deserves a slow and painful death in front of your loved ones. Also you are not a nice guy.

I personally know of four female friends who have emparted memories to me that were 100% rape, by all accounts. All four have said, “well he was a nice guy….”. This is so sickeningly sad for many reasons. Not only is it bad that these guys are viewed as nice guys but the four women I am referring to still look back st these events as if they aren’t that bad and the predators can go on living life like defilement didn’t occur.

You have the right to set boundaries!

You are allowed to express these boundaries!

You are allowed to defend these boundaries!

You are allowed to eliminate those who do not respect these boundaries from your life, and as far as I am concerned, the face of the earth!

So what is a nice guy?

To give with out the thought of reward, treating others pleasantly no matter what and respecting others wishes are what makes a “nice guy” or person rather. I think you need to find joy in the thankfulness of others in order to be a nice guy.

As I said earlier not all nice guys finish last. What I mean by that is for the most part nice guys aren’t finished. A nice guy does not stop being nice. Some nice guys end up in loving happy places. Some nice guys end up self loathing, self deprecating awkward guys who will never achieve love and happiness. And the rest of nice guys live some where inbetween like every other sub group out there.

If your worried about finishing last that means you haven’t finished! Keep going, work harder. Weather that means working on your self or working to find some one to finish with. Because in the end that’s all that matters. What we did while we ran and how we finished. As I’ve said before every morning you should wake up with the intention that, that day you are going to do something that your future self will thank you for and possibly your future partner. Don’t forget what Charlie Brown said, “In life it’s not where you go- it’s who goes with you”.

Then he stepped off of his soap box.

To be honest I have no idea what I am talking about and for all I know I could be an estranged old man walking around the sanitarium, naked, mutter what he thinks to be… advice and wise tales.

As always I am not a mental health professional or a relationship specialist. These are simply my findings from life and my hope is that you can take something positive away from it or maybe a new point of view. If you hated it so much and you feel the need to let me know how awful it was or I am please feel free to email me at TheDepartmentOfComplaints@gmail.com

Keep in mind it is important to me that these entries be more of a stream of consciousness and not and editorial, as such no edits or corrections are ever made. 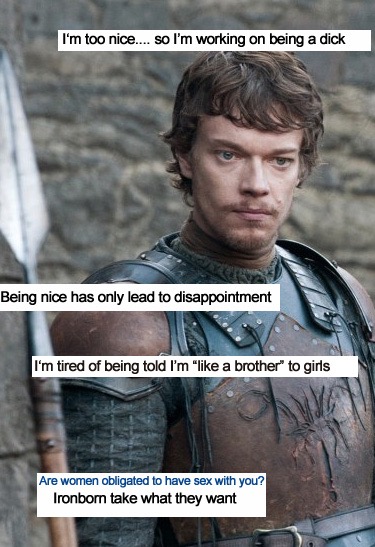